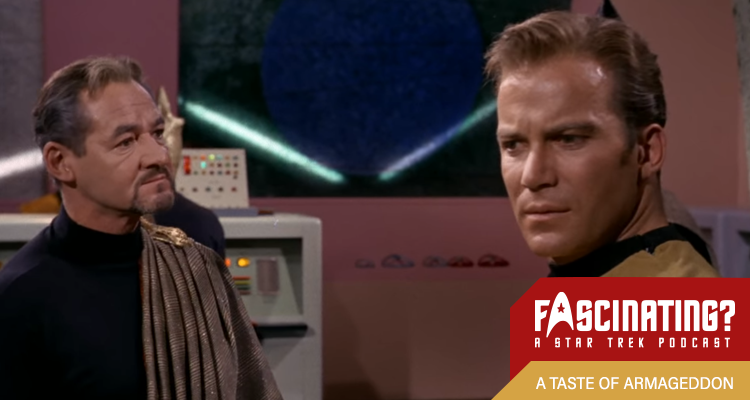 A Taste of Armageddon was the twenty-third episode of Star Trek’s debut season to air, with a civilisation locked in perpetual war against its neighbour. In this episode Gerry and Iain discuss the merits of self-disintegration.


When the Enterprise is refused permission to approach the planet Eminiar VII, visiting Ambassador Robert Fox (Gene Lyons) overrules Kirk’s instinct to comply and a deadly chain of events is set in motion.


Greeted on Eminiar’s surface by Mea 3 (Barbara Babcock), Kirk and Spock are initially confused by reports of devastation and deaths incurred in an invisible war, before learning from the planet’s leader Anan 7 (David Opatoshu) that the war is simulated, with casualties required to report for disintegration. Worse, the Enterprise has been considered destroyed, like a previous visiting starship, and all aboard are called on to surrender their lives.


A Taste of Armageddon was directed by Joseph Pevney, one of his record-tying fourteen Star Trek episodes. The writer was Robert Hamner with producer Gene Coon also working on the script.


In this episode Gerry and Iain considered whether war has any benefits.


A Taste of Armageddon was released in 1967. It is 50 minutes long and originally aired on the NBC network. It can be viewed on CBS All Access in the United states, Netflix in the UK and is available on DVD and Blu Ray in other countries, including a comprehensive remastered set of all three seasons released by Paramount Home Entertainment.