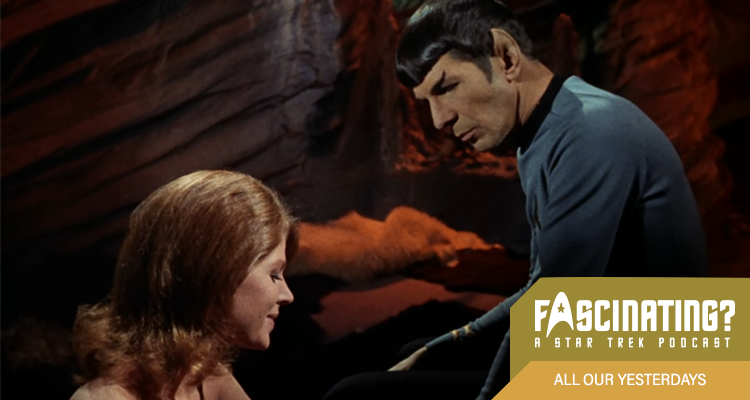 All Our Yesterdays was the twenty third episode of Star Trek’s third season to air, with a civilisation using time travel technology to escape an impending apocalypse. In this episode Gerry and Iain discuss looking before you leap.


After arriving at a planet due to face the supernova of its star, Kirk, Spock and McCoy find one person alive on the surface, a librarian named Atoz (Ian Wolfe) who is guardian of an unusual time travel device.


Trapped separately in the past, Spock and McCoy meet Zarabeth (Mariette Hartley) and struggle with Spock’s genetic regression, while Kirk enlists the help of a fellow time traveller (Kermit Murdock) to return to the library before the star explodes.


All Our Yesterdays was directed by Marvin Chomsky, the last of his three episodes. The script was written by Jean Lisette Aroeste, who also penned Is There In Truth No Beauty?


In this episode Gerry and Iain considered whether time is a flat circle.


All Our Yesterdays was released in 1969. It is 50 minutes long and originally aired on the NBC network. It can be viewed on Paramount+ in the United states, Netflix in the UK and is available on DVD and Blu Ray in other countries, including a comprehensive remastered set of all three seasons released by Paramount Home Entertainment.