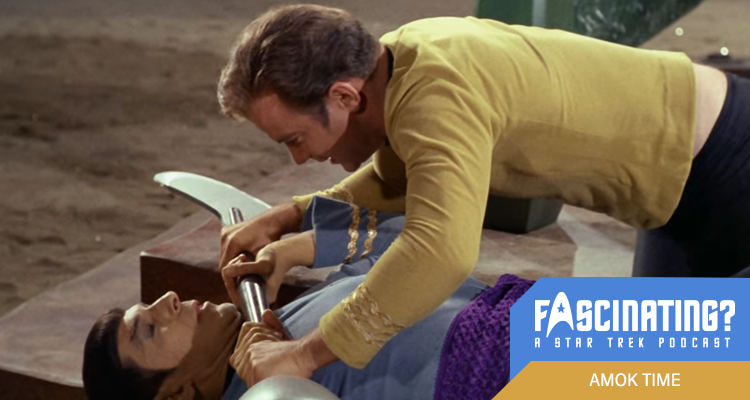 Amok Time was the first episode of Star Trek’s second season to air, with Spock drawn back to his homeland by a primal urge. In this episode Gerry and Iain discuss situations where the best course of action is to convince a colleague they’ve killed your boss.


With Spock displaying increasingly erratic behaviour, Kirk ignores an order from Admiral Komack (Byron Morrow) to stay on mission and detours to Vulcan where Spock expects to be reunited with his betrothed, T’Pring (Arlene Martel), for a traditional ceremony.


Awed by the presence of T’Pau (Celia Lovsky), Kirk agrees to participate in a challenge when T’Pau rejects Spock for her lover Stonn (Lawrence Montaigne). The episode also sees the debut of Walter Koenig as Chekov.


Amok Time was directed by Joseph Pevney, the sixth of his fourteen Star Trek episodes. The writer was Theodore Sturgeon, his second and final episode for the show.


In this episode Gerry and Iain considered whether Plomeek soup could ever measure up to a bowl of chicken noodle.


Amok Time was released in 1967. It is 50 minutes long and originally aired on the NBC network. It can be viewed on CBS All Access in the United states, Netflix in the UK and is available on DVD and Blu Ray in other countries, including a comprehensive remastered set of all three seasons released by Paramount Home Entertainment.