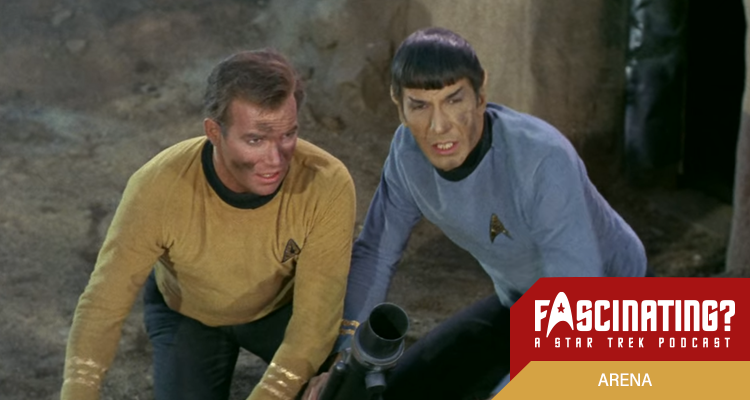 Arena was the eighteenth episode of Star Trek’s debut season to air, with a colony under siege and Kirk forced into a one-on-one battle for survival. In this episode Gerry and Iain discuss thinking you’re smarter than the other guy while he listens in and plots your demise.


After chasing an invading force away from a Federation colony, Kirk and the Enterprise continue the pursuit until a third species – the powerful Metrons – intervene to set up a contest between Kirk and the captain of the alien ship.


With the Gorn captain (Ted Cassidy, Bill Blackburn, Bobby Clark, Gary Combs) and Kirk set to battle to the death, Spock and the Enterprise crew can only watch on and hope for the best, however grim the odds.


Arena was directed by Joseph Pevney, the first of his record-equalling fourteen Star Trek episodes. The writer was Gene Coon, with a story credit to Fredric Brown.


In this episode Gerry and Iain considered the misfortune of being the crew abandoned on a decimated colony when your ride home gets deposited halfway across the galaxy.


Arena was released in 1967. It is 50 minutes long and originally aired on the NBC network. It can be viewed on CBS All Access in the United states, Netflix in the UK and is available on DVD and Blu Ray in other countries, including a comprehensive remastered set of all three seasons released by Paramount Home Entertainment.