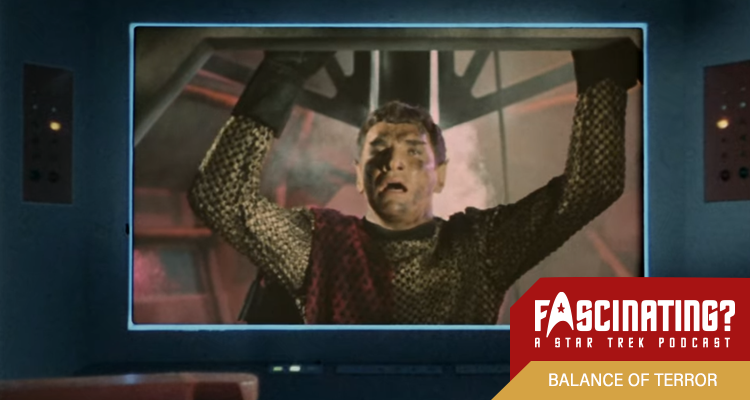 Balance of Terror was the fourteenth episode of Star Trek‘s debut season to air, with a skilled adversary presenting a tough examination of Kirk’s battle craft. In this episode Gerry and Iain debate the rights and wrongs of bearing grudges from your ancestors’ wars.


Responding to a distress call from an outpost bordering the Neutral Zone between Federation and Romulan space, Kirk and the Enterprise are thrust into conflict with an enemy unseen in over a century when fired upon by a Romulan Warbird and its commander (Mark Lenard).


Casualties of the conflict included a Romulan Centurion (John Warburton), the Romulan officer Decius (Lawrence Montaigne) and the Enterprise phaser operator Lt Tomlinson (Stephen Mines), who had been due to marry fellow officer Angela Martine (Barbara Baldavin) that day. Lt. Stiles (Paul Comi) was saved from a similar fate by the quick thinking of Spock, who he had suspected of being a Romulan infiltrator for much of the episode.


Balance of Terror was directed by Vincent McEveety, the third of six episodes he helmed. The episode was written by Paul Schneider, who wrote one further episode of the series, along with an episode of The Animated Series.


In this episode Gerry and Iain considered what friendship there is to be found between two warring adversaries and whether a foolish man builds his house upon an asteroid.


Balance of Terror was released in 1966. It is 50 minutes long and originally aired on the NBC network. It can be viewed on CBS All Access in the United states, Netflix in the UK and is available on DVD and Blu Ray in other countries, including a comprehensive remastered set of all three seasons released by Paramount Home Entertainment.