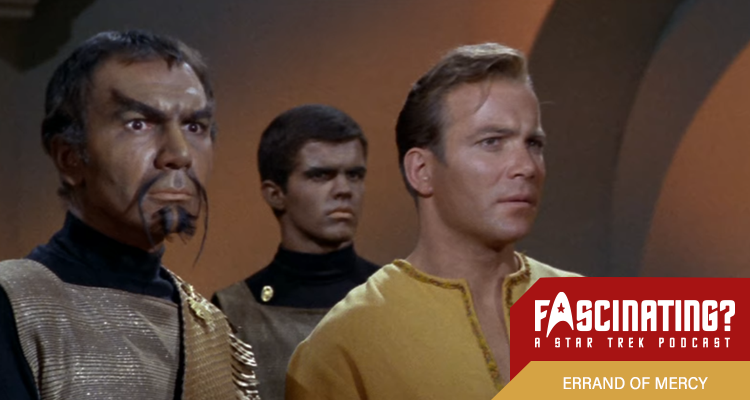 Errand of Mercy was the twenty-sixth episode of Star Trek’s debut season to air, with a seemingly primitive, pacifist race facing a Klingon occupation. In this episode Gerry and Iain discuss the relative merits or freedom and order.


As war breaks out between the Federation and the Klingon Empire, the Enterprise is sent to Organia, a strategically important world, in order to head off enemy endeavours to occupy the planet. There Kirk and Spock meet Ayelborne (John Abbott) and the Council of Elders, who urge them to leave immediately.


When Klingon forces led by Kor (John Colicos) arrive and seem to act as predicted, Kirk and Spock attempt to resist, but a final intervention from the Elders puts war beyond the capability of each side.


Errand of Mercy was directed by John Newland, his only Star Trek episode. The writer was again Gene Coon, the long-term producer for the show.


In this episode Gerry and Iain considered whether they beat the odds or had the game snatched away at the vital moment.


Errand of Mercy was released in 1967. It is 50 minutes long and originally aired on the NBC network. It can be viewed on CBS All Access in the United states, Netflix in the UK and is available on DVD and Blu Ray in other countries, including a comprehensive remastered set of all three seasons released by Paramount Home Entertainment.