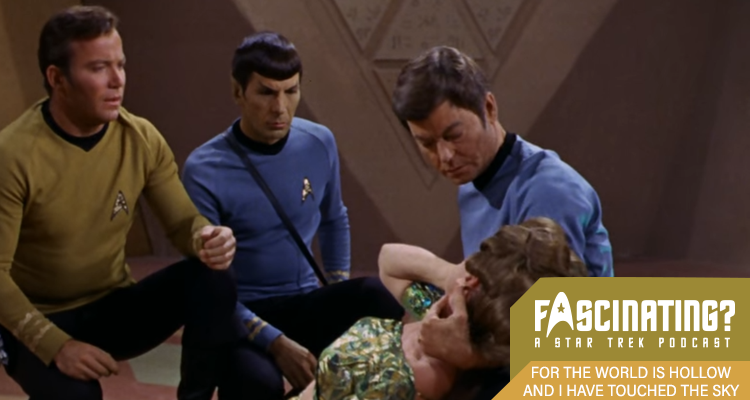 For the World is Hollow and I Have Touched the Sky was the eighth episode of Star Trek’s third season to air, with a displaced civilisation unknowingly on course to destroy an inhabited world. In this episode Gerry and Iain discuss the difference between known unknowns and unknown unknowns.


Intercepting an asteroid bound to destroy the world of Daran V, the Enterprise crew discover it is in fact an ancient spaceship containing a population unaware that they are not in fact on a planet themselves. Led by High Priestess Natira (Katherine Woodville), they are ignorant of their world’s true nature.


When Natira takes a romantic interest in the recently-diagnosed-as-terminally-ill McCoy, it seems the doctor may choose to live out his days on the asteroid-ship, but a new discovery shows him it may be possible to save the colonists as well as the people of Daran V.


For the World is Hollow and I Have Touched the Sky was directed by Tony Leader, his only Star Trek episode. The writer was Hendrik Vollaerts, the third of his four for the show.


In this episode Gerry and Iain considered whether a McCoy love story was overdue or unnecessary.


For the World is Hollow and I Have Touched the Sky was released in 1968. It is 50 minutes long and originally aired on the NBC network. It can be viewed on Paramount+ in the United states, Netflix in the UK and is available on DVD and Blu Ray in other countries, including a comprehensive remastered set of all three seasons released by Paramount Home Entertainment.