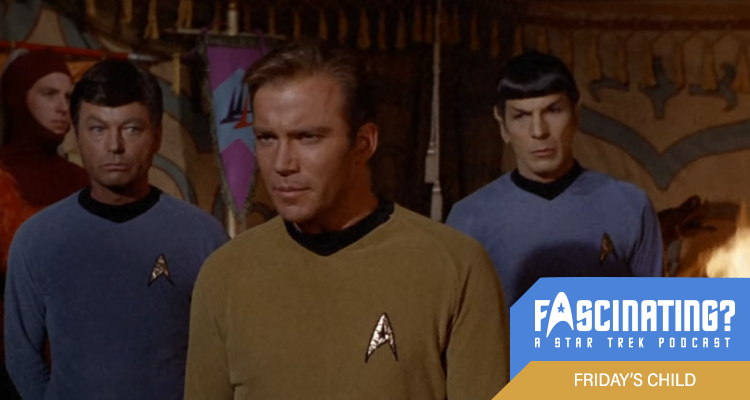 Friday’s Child was the eleventh episode of Star Trek’s second season to air, with the return of the Klingons and the birth of a child who would be king. In this episode Gerry and Iain discuss inappropriate touching.


Hoping to negotiate a mining treaty, Kirk, Spock and McCoy visit a settlement where the doctor previously spent time before his posting on the Enterprise. There they meet Maab (Michael Dante) and are surprised to encounter a Klingon named Kras (Tige Andrews).


An already complicated situation gains a new dimension when the group are compelled to care for the recently widowed Eleen (Julie Newmar) who is pregnant with her recently-assassinated husband’s child.


Friday’s Child was directed by Joseph Pevney, the tenth of his fourteen Star Trek episodes. The writer was Dorothy Fontana.


In this episode Gerry and Iain considered whether punching a woman for complaining about unwanted physical contact is appropraite behaviour for a professional.


Friday’s Child was released in 1967. It is 50 minutes long and originally aired on the NBC network. It can be viewed on CBS All Access in the United states, Netflix in the UK and is available on DVD and Blu Ray in other countries, including a comprehensive remastered set of all three seasons released by Paramount Home Entertainment.