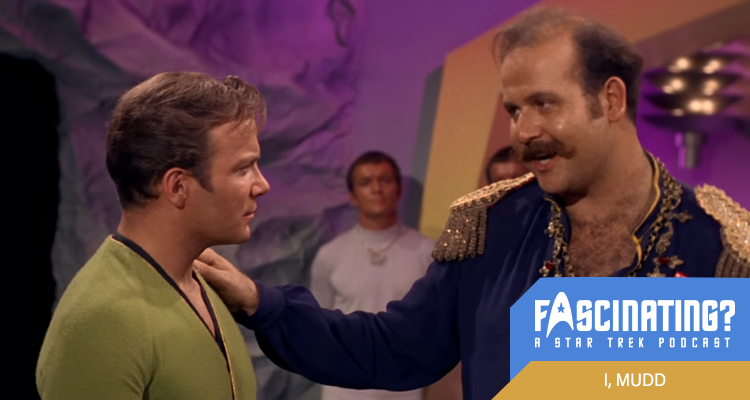 I, Mudd was the eighth episode of Star Trek’s second season to air, with a returning foe and an array of specially designed sex robots. In this episode Gerry and Iain discuss the power of amateur dramatics.


When an android called Norman (Richard Tatro) commandeers the Enterprise and brings it to a planet, there is much to be concerned about. This is only exacerbated when a visit to the surface reveals the apparent mastermind behind the plan, one Harcourt Fenton Mudd (Roger C. Carmel).


When it is the androids who turn out to be in control, Kirk and his crew must convince the Alices (Alyce and Rhae Andrece), Hermans (Ted and Tom LeGarde), Barbaras (Colleen and Maureen Thornton) and Maisies (Starr and Tamara Wilson), not to mention Stellas (Kay Elliot) that their conclusions are wrong – or find a way to outwit the machines.


I, Mudd was directed by Marc Daniels, the tenth of his fourteen Star Trek episodes. The writer was Stephen Kandel, the second of his two stories for the show after also penning Mudd’s Women.


In this episode Gerry and Iain considered whether Harry got a fitting resolution to his arc.


I, Mudd was released in 1967. It is 50 minutes long and originally aired on the NBC network. It can be viewed on CBS All Access in the United states, Netflix in the UK and is available on DVD and Blu Ray in other countries, including a comprehensive remastered set of all three seasons released by Paramount Home Entertainment.