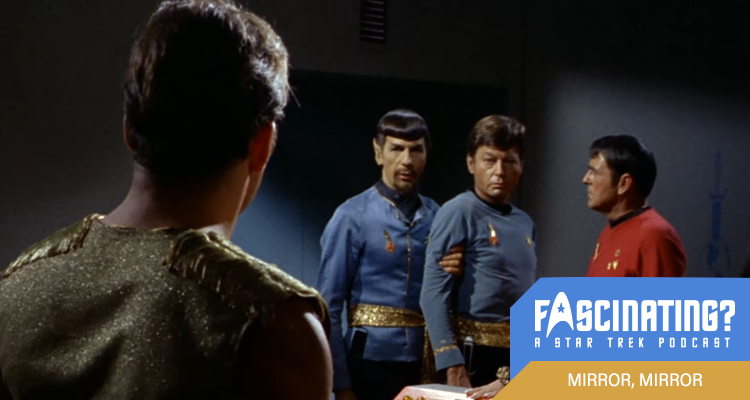 Mirror, Mirror was the fourth episode of Star Trek’s second season to air, with several key crewmen transported to a parallel universe. In this episode Gerry and Iain discuss the multiverse theory and some interesting facial hair.


When an ion storm combines with a transporter malfunction to switch Kirk, McCoy, Uhura and Scotty with their less civilised parallel universe counterparts, they must act quickly to return to their own Enterprise while they still can.


Kirk has more than his own men to think of though, with the fate of a peaceful alien race under threat and his counterpart’s lover Marlena (Barbara Luna) at risk too.


Mirror, Mirror was directed by Marc Daniels, the eighth of his fourteen Star Trek episodes. The writer was Jerome Bixby, who would go on to write three more episodes for the show.


In this episode Gerry and Iain considered whether bare midriffs and goatees are signs of true evil.


Mirror, Mirror was released in 1967. It is 50 minutes long and originally aired on the NBC network. It can be viewed on CBS All Access in the United states, Netflix in the UK and is available on DVD and Blu Ray in other countries, including a comprehensive remastered set of all three seasons released by Paramount Home Entertainment.