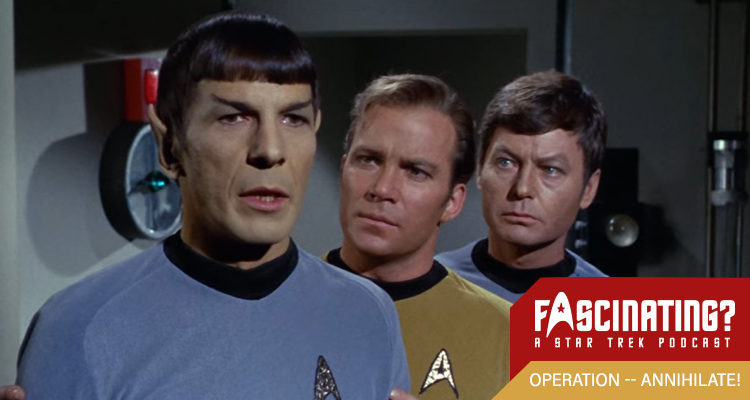 Operation — Annihilate! was the twenty-ninth episode of Star Trek’s debut season to air, with a colony under attack and a valued crew member in great distress. In this episode Gerry and Iain discuss family, friendship and medical malpractice.


After tracking a pattern of unexplained erratic behaviour across a sector of space, the Enterprise crew discover the affliction has reached a Federation colony where Kirk’s brother Sam (William Shatner), his wife Aurelan (Joan Swift) and son Peter (Craig Huxley) live.


Spock becomes infected by the parasitic invaders and must fight overwhelming pain and his captain’s better judgment to help Kirk and McCoy figure out a way to save the colonists – and save Spock himself.


Operation — Annihilate! was directed by Herschel Daugherty, the first of his two Star Trek episodes. The writer was Steven Carabatsos, his second and final episode for the show.


In this episode Gerry and Iain considered whether flying alien jellyfish present a real and present danger.


Operation — Annihilate! was released in 1967. It is 50 minutes long and originally aired on the NBC network. It can be viewed on CBS All Access in the United states, Netflix in the UK and is available on DVD and Blu Ray in other countries, including a comprehensive remastered set of all three seasons released by Paramount Home Entertainment.