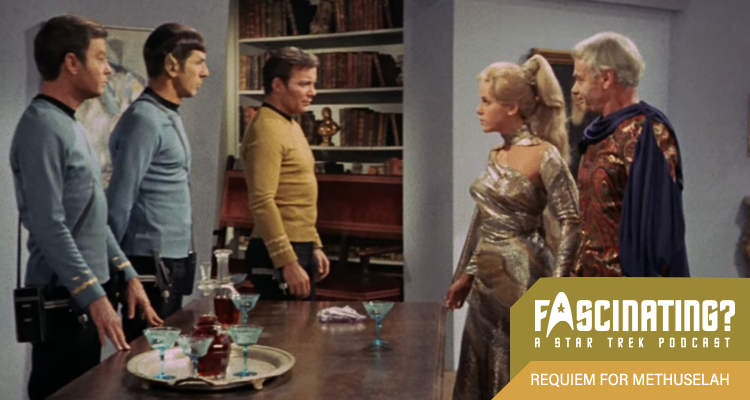 Requiem for Methuselah was the nineteenth episode of Star Trek’s third season to air, with a planet’s sole inhabitant inhibiting an operation to retrieve chemicals required to end a deadly epidemic. In this episode Gerry and Iain discuss whether Kirk has his priorities straight, given the circumstances.


Seeking a supply of ryetalin to synthesise a cure for an epidemic that threatens to engulf the Enterprise, Kirk, McCoy and Spock visit a planet rich in the substance. There they meet Flint (James Daly) who claims to be the only person living on the planet and initially denies permission to mine the mineral they require.


Later changing his mind, Flint invites the landing party into his home where Spock is surprised to see seemingly original works by some of Earth’s greatest artists and musicians, but produced contemporaniously. Learning Flint is thousands of years old, the matter becomes complicated when Kirk finds himself irresistably drawn to Flint’s android companion, Rayna (Louise Sorel).


Requiem for Methuselah was directed by Murray Golden, his only work for the show. The writer was Jerome Bixby, the last of his four episodes.


Requiem for Methuselah was released in 1969. It is 50 minutes long and originally aired on the NBC network. It can be viewed on Paramount+ in the United states, Netflix in the UK and is available on DVD and Blu Ray in other countries, including a comprehensive remastered set of all three seasons released by Paramount Home Entertainment.