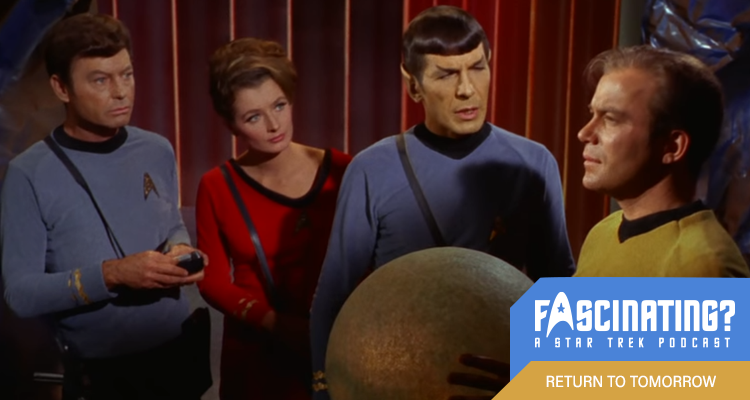 Return to Tomorrow was the twentieth episode of Star Trek’s second season to air, with an advanced but near-extinct alien race forced to share human bodies to survive. In this episode Gerry and Iain discussed giant glowing orbs.


Summoned by means unknown to a planet as yet uncharted by the Federation, Kirk and the Enterprise crew encounter Sargon, one of three survivors of an ancient race that went extinct half a million years earlier.


Requesting the use of Kirk, Spock and Lt. Commander Mulhall (Diana Muldaur)’s bodies, Sargon and his compatriots Henoch and Thalassa seek to build artificial bodies to carry their consciousness, but they are not all committed to that plan.


Return to Tomorrow was directed by Ralph Senensky, his fourth of six Star Trek episodes. The writer was John T. Dugan, his only episode for the show.


In this episode Gerry and Iain considered the pros and cons of sharing your body with a persuasive alien.


Return to Tomorrow was released in 1968. It is 50 minutes long and originally aired on the NBC network. It can be viewed on CBS All Access in the United states, Netflix in the UK and is available on DVD and Blu Ray in other countries, including a comprehensive remastered set of all three seasons released by Paramount Home Entertainment.