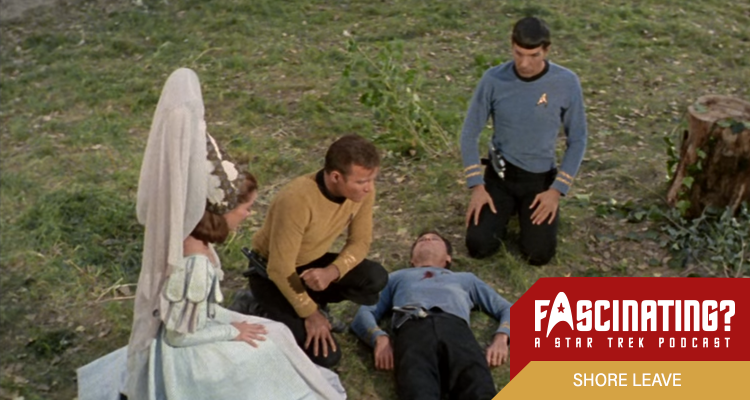 Shore Leave was the fifteenth episode of Star Trek‘s debut season to air, with unlikely events interrupting an idyllic respite for the Enterprise crew. In this episode Gerry and Iain discuss wrestling with tigers and the fine line between chivalry and inappropriateness.


After recent traumatic events, Dr McCoy is keen for the crew to enjoy a little shore leave and leads an exploratory team to consider a candidate planet. When he spots characters from Lewis Carroll’s Alice in Wonderland he struggles to determine whether his own mind is overworked, or if there is something dangerous afoot.


When Kirk joins his team on the surface and encounters two figures from his past, Academy classmate Finnegan (Bruce Mars) and lost love Ruth (Shirley Bonne) he must find a way to keep his crew alive while the mystery remains unsolved. Meanwhile, Yeoman Barrows (Emily Banks) is left to grieve a fallen lover.


Shore Leave was directed by Robert Sparr, his only entry in the series. The episode was written by Theodore Sturgeon, who wrote one further episode of the series, along with two unproduced stories.


In this episode Gerry and Iain considered the difference between fantasy and reality and the importance of keeping your tigers at arm’s length.


Shore Leave was released in 1966. It is 50 minutes long and originally aired on the NBC network. It can be viewed on CBS All Access in the United states, Netflix in the UK and is available on DVD and Blu Ray in other countries, including a comprehensive remastered set of all three seasons released by Paramount Home Entertainment.