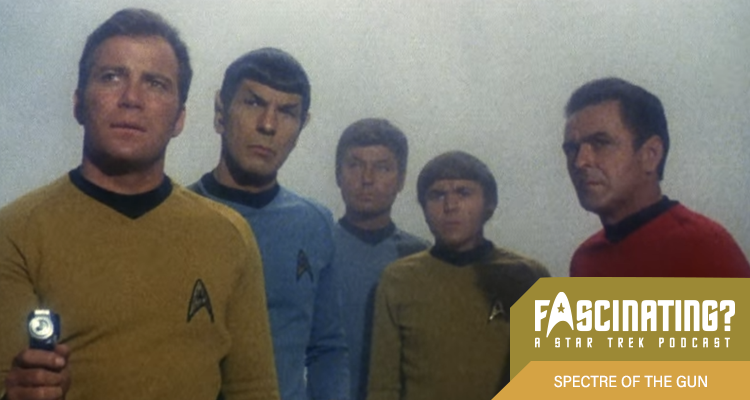 Spectre of the Gun was the sixth episode of Star Trek’s third season to air, with an alien race punishing the Enterprise’s unwelcome visit with a theatrical form of execution. In this episode Gerry and Iain discuss the nature of reality.


On a mission to make contact with the reclusive Melkotian race, Kirk orders the Enterprise to ignore a warning buoy and approach the alien planet. On transporting to the surface he, Spock, McCoy, Chekov and Scotty are soon placed in a Wild West fantasy setting by an angry Melkotian (Abraham Sofaer).


Drawing on a remarkably niche level of historical knowledge, they place themselves at the OK Corral where they must face off against Wyatt (Ron Soble), Morgan (Rex Holman) and Virgil Earp (Charles Maxwell) along with Doc Holliday (Sam Gilman) to save the town and it’s residents including the barman Ed (Charles Seel), Sheriff Behan (Bill Zuckert) and Chekov’s sudden love interest Sylvia (Bonnie Beecher).


Spectre of the Gun was directed by Vincent McEveety, the last of his six episodes in the chair. The writer was Gene Coon under his Lee Cronin alias.


In this episode Gerry and Iain considered the legacy of Wyatt Earp.


Spectre of the Gun was released in 1968. It is 50 minutes long and originally aired on the NBC network. It can be viewed on Paramount+ in the United states, Netflix in the UK and is available on DVD and Blu Ray in other countries, including a comprehensive remastered set of all three seasons released by Paramount Home Entertainment.