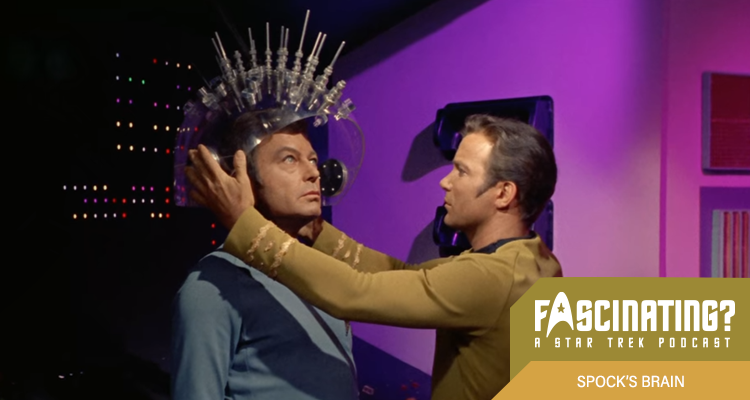 Spock’s Brain was the first episode of Star Trek’s third season to air, with juvenile aliens removing Spock’s brain to serve as the central processor for their life support system. In this episode Gerry and Iain discuss the ethics behind using a brainless corpse as a remote control toy.


When Spock’s brain is stolen, but his body left intact, Kirk leads the Enterprise to Sigma Draconis VI, hoping to discover both the thief and her stolen Vulcan brain on the planet.


On the surface the Enterprise crew discover a way to access a subterranean civilisation which they are warned will bring “pain and delight”. There they find the thief, Kara (Marj Dusay), only to discover she no longer retains the knowledge that would allow her to restore Spock’s brain to his body.


Spock’s Brain was directed by Marc Daniels, the last of his fourteen episodes in the chair. The writer was Gene Coon under the alias Lee Cronin.


In this episode Gerry and Iain considered the necessity for conducting brain replacement surgery under local anaesthetic.


Spock’s Brain was released in 1968. It is 50 minutes long and originally aired on the NBC network. It can be viewed on Paramount+ in the United states, Netflix in the UK and is available on DVD and Blu Ray in other countries, including a comprehensive remastered set of all three seasons released by Paramount Home Entertainment.