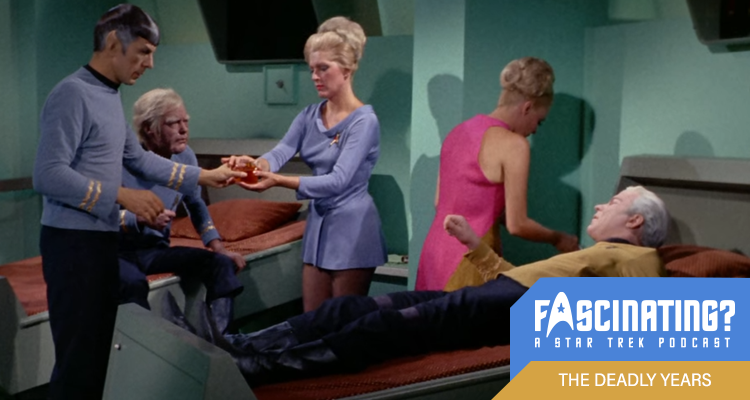 The Deadly Years was the twelfth episode of Star Trek’s second season to air, with the sudden onset of old age threatening Kirk’s captaincy, his competency and his life. In this episode Gerry and Iain discuss ageing gracefully.


After all six members of a colony are discovered dead from rapid onset of old age, curiosity turns to desperation as an Enterprise landing party – including Kirk, Scotty, Spock and McCoy – begin to experience similar symptoms.


With visiting Commodore Stocker (Charles Drake) anxious to reach Starbase 10 with his colleague, an old flame of Kirk’s, Dr Janet Wallace (Sarah Mrshall), a trip across the Neutral Zone threatens to complicate matters even further.


The Deadly Years was directed by Joseph Pevney, the eleventh of his fourteen Star Trek episodes. The writer was David P. Harmon, the first of his two scripts for the series.


In this episode Gerry and Iain considered the importance of setting time critical medical research aside for a lengthy court hearing.


The Deadly Years was released in 1967. It is 50 minutes long and originally aired on the NBC network. It can be viewed on CBS All Access in the United states, Netflix in the UK and is available on DVD and Blu Ray in other countries, including a comprehensive remastered set of all three seasons released by Paramount Home Entertainment.