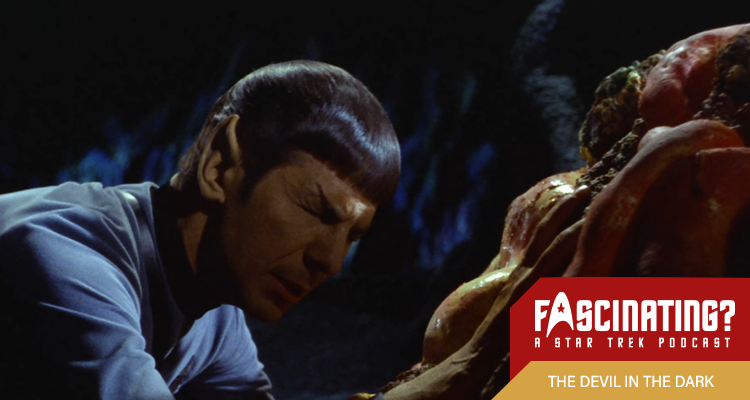 The Devil in the Dark was the twenty-fifth episode of Star Trek’s debut season to air, with a mining community terrorised by a silicon-based lifeform. In this episode Gerry and Iain discuss the use of cement as a healing agent.


The Enterprise crew are sent to the mining colony on Janus VI to ascertain whether the problems that have seen production drop dramatically can be solved. Meeting Chief Vanderberg (Ken Lynch) they learn about the creature that is killing the miners, leaving nothing but charred remains.


Although initially concerned with just restoring the mine’s production capacity, a face-to-face encounter with the creature, a Horta (Janos Prohaska), softens Kirk’s stance and he and Spock are able to communicate with the creature while Lt Giotto (Barry Russo) holds back Appel (Brad Weston) and the rest of the miners, intent on revenge for their fallen colleagues.


The Devil in the Dark was directed by Joseph Pevney the fourth of his fourteen Star Trek episodes. The writer was Gene Coon, the long-term producer for the show.


In this episode Gerry and Iain considered improvised solutions to broken and antiquated mechanical devices.


The Devil in the Dark was released in 1967. It is 50 minutes long and originally aired on the NBC network. It can be viewed on CBS All Access in the United states, Netflix in the UK and is available on DVD and Blu Ray in other countries, including a comprehensive remastered set of all three seasons released by Paramount Home Entertainment.