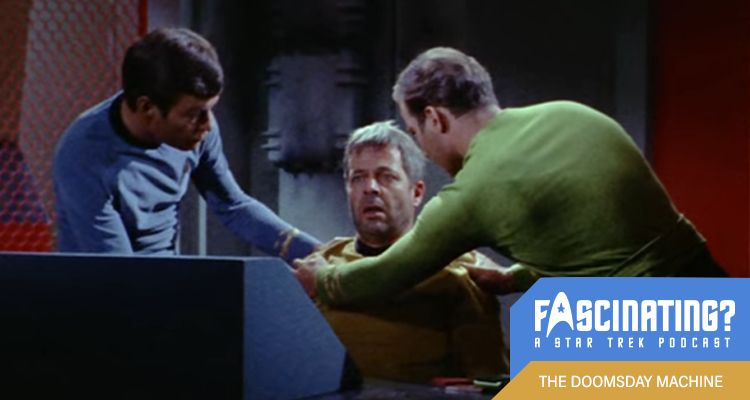 The Doomsday Machine was the sixth episode of Star Trek’s second season to air, with a traumatised starship commander intent on revenge against the machine that killed his crew. In this episode Gerry and Iain discuss the design aesthetics of planet killers.


When the Enterprise encounters a distress signal from the USS Constellation, Kirk and the crew are concerned to find the ship apparently disabled and abandoned in a decimated star system. Once on board they discover the sole survivor is the commanding officer, Commodore Decker (William Windom).


When Kirk becomes trapped on the wreck of the Constellation, Decker takes command of the Enterprise and leads it into conflict with the titular Doomsday Machine. Elsewhere, Lt Palmer (Elizabeth Rogers) does her best impression of Lt. Uhura.


The Doomsday Machine was directed by Marc Daniels, the ninth of his fourteen Star Trek episodes. The writer was Norman Spinrad, his only story for the show.


In this episode Gerry and Iain considered what Uhura was so busy with all episode long.


The Doomsday Machine was released in 1967. It is 50 minutes long and originally aired on the NBC network. It can be viewed on CBS All Access in the United states, Netflix in the UK and is available on DVD and Blu Ray in other countries, including a comprehensive remastered set of all three seasons released by Paramount Home Entertainment.