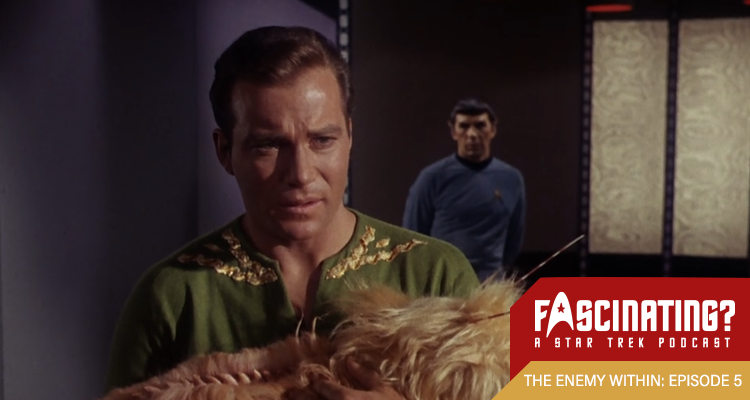 The Enemy Within was the fifth episode of Star Trek‘s debut season to air, with Kirk split in two by a transporter accident and crewmen trapped on a planet below. In this episode Gerry and Iain take a look at a skilled animal actor and a deeply questionable piece of Vulcan logic.


There’s a smaller cast than usual for this episode as Bill Shatner faces off against himself for much of the duration. Jim Goodwin does make his first of three appearances as Farrell.


The real star of the show was, of course, the dog who played the part of the Alpha-177 creature, together with both parts of its split self after the transporter malfunction. Phenomenal range.


The Enemy Within was directed by Leo Penn and was written by Richard Matheson. For both men this would be their only work for the show which, given the quality of the episode, is a shame.


In this episode Gerry and Iain considered whether one half of a man’s personality can ever be truly considered an ‘imposter’; the treatment of Janice Rand and Spock’s shocking final comment to her; and the fate of the crew left stranded on Alpha-177.


The Enemy Within was released in 1966. It is 50 minutes long and originally aired on the NBC network. It can be viewed on CBS All Access in the United states, Netflix in the UK and is available on DVD and Blu Ray in other countries, including a comprehensive remastered set of all three seasons released by Paramount Home Entertainment.