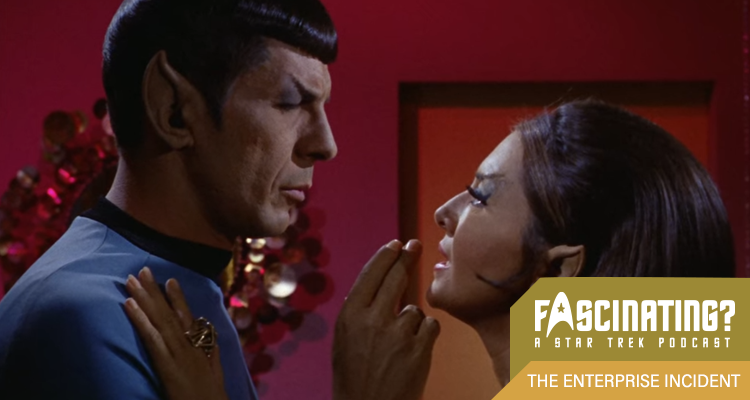 The Enterprise Incident was the second episode of Star Trek’s third season to air, with an ambitious Romulan Commander looking to recruit Spock as well as claim the Enterprise. In this episode Gerry and Iain discuss divided loyalties and the route to Spock’s heart.


When an erratic Kirk leads the Enterprise into Romulan space it is soon surrounded by enemy vessels seeking to capture or destroy the Federation’s flagship.


With a cunning Romulan Commander (Joanne Linville) and her next-in-command Tal (Jack Donner) seemingly in control of the situation, can Spock’s loyalties be turned to service the Empire?


The Enterprise Incident was directed by John Meredith Lucas, the second of his three episodes in the chair. The writer was Dorothy Fontana, the eighth of her ten writing credits for the show.


In this episode Gerry and Iain considered whether the dress code for Romulan Commanders was unisex.


The Enterprise Incident was released in 1968. It is 50 minutes long and originally aired on the NBC network. It can be viewed on Paramount+ in the United states, Netflix in the UK and is available on DVD and Blu Ray in other countries, including a comprehensive remastered set of all three seasons released by Paramount Home Entertainment.