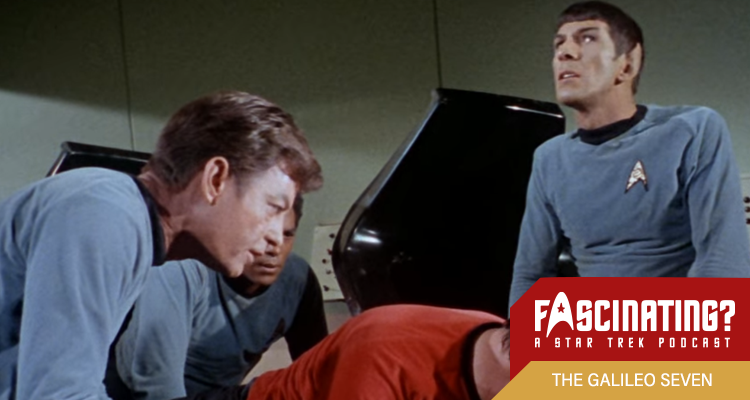 The Galileo Seven was the sixteenth episode of Star Trek’s debut season to air, with a stranded shuttle crew facing a race against time to alert rescuers to their predicament. In this episode Gerry and Iain discuss leadership and the importance of sound decision-making.


En route to a rendezvous with vital supplies to help fight a pandemic, the Enterprise stops off to examine a pulsar formation. Unexpectedly, the shuttle carrying Spock, McCoy, Scotty, Yeoman Mears (Phyllis Douglas) and crewmen Boma (Don Marshall), Latimer (Rees Vaughn) and Gaetano (Peter Marko) is captured by the phenomenon and grounded on a planet with no immediate chance to escape.


Meanwhile, on the Enterprise, Kirk’s efforts to launch a rescue mission are not helped by the imposing presence of Commissioner Ferris (John Crawford) who is keen to make sure the rendezvous is kept and willing to take command of the ship to achieve that.


The Galileo Seven was directed by Robert Gist, his only Star Trek episode. The writer was Oliver Crawford, the first of his three stories for the show.


In this episode Gerry and Iain considered the importance of not irritating all of the people you are supposed to be leading, particularly in times of crisis.


The Galileo Seven was released in 1967. It is 50 minutes long and originally aired on the NBC network. It can be viewed on CBS All Access in the United states, Netflix in the UK and is available on DVD and Blu Ray in other countries, including a comprehensive remastered set of all three seasons released by Paramount Home Entertainment.