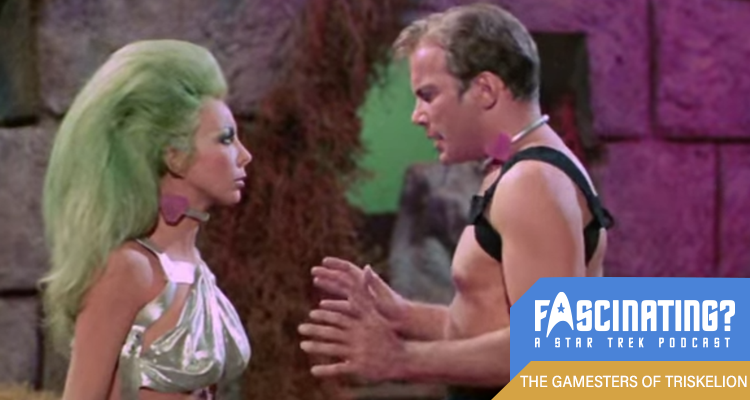 The Gamesters of Triskelion was the sixteenth episode of Star Trek’s second season to air, with an intergalactic gladiatorial contest set up by some disembodied brains. In this episode Gerry and Iain discuss whether Uhura’s ordeal was handled badly.


After being zapped across a dozen light years or more, Kirk – along with Uhura and Chekov – are declared Thralls and told by the head Thrall, Galt (Joseph Ruskin), that they are to be trained to fight in the arena for the rest of their lives.


Their training is to be provided by Lars (Steve Sandor) who is assigned to Uhura, Tamoon (Jane Ross) who is to train Chekov and Shahna (Angelique Pettyjohn) who is allocated to work with Kirk. Meanwhile, the Enterprise must follow an unlikely path if they are to arrive in time to rescue their crewmates.


The Gamesters of Triskelion was directed by Gene Nelson, his only Star Trek episode. The writer was Margaret Armen, the first of her three scripts for the show.


In this episode Gerry and Iain considered Kirk’s forceful interactions with Shahna.


The Gamesters of Triskelion was released in 1968. It is 50 minutes long and originally aired on the NBC network. It can be viewed on CBS All Access in the United states, Netflix in the UK and is available on DVD and Blu Ray in other countries, including a comprehensive remastered set of all three seasons released by Paramount Home Entertainment.