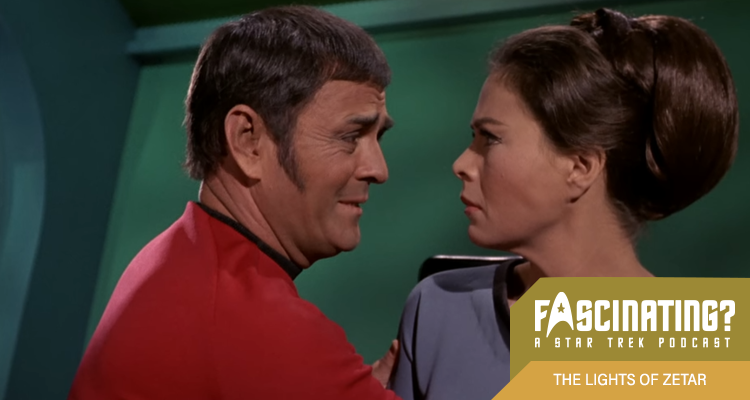 The Lights of Zetar was the eighteenth episode of Star Trek’s third season to air, with the last remnants of a destroyed civilisation causing difficulties for the Enterprise. In this episode Gerry and Iain discuss whether Scotty’s behaviour ought to raise more concerns.


On the way to the Federation’s primary information hub at Memory Alpha, the Enterprise encounters an unusual entity characterised by it’s coloured lights. After Lt. Mira Romaine (Jan Shutan) is strongly affected, Kirk tries to investigate but makes little progress thanks to Scotty’s interference.


It becomes apparent that Romaine’s mind is being hijacked by the lifeforms from the light entity and McCoy must implement a radical solution to save her. Later, Kirk and McCoy impress upon Spock the value of Scotty’s attention to Romaine’s survival.


The Lights of Zetar was directed by Herb Kenwith, his only work for the show. The story was by Shari Lewis, with an assist to Jeremy Tarcher.


In this episode Gerry and Iain considered agency and its importance.


The Lights of Zetar was released in 1969. It is 50 minutes long and originally aired on the NBC network. It can be viewed on Paramount+ in the United states, Netflix in the UK and is available on DVD and Blu Ray in other countries, including a comprehensive remastered set of all three seasons released by Paramount Home Entertainment.