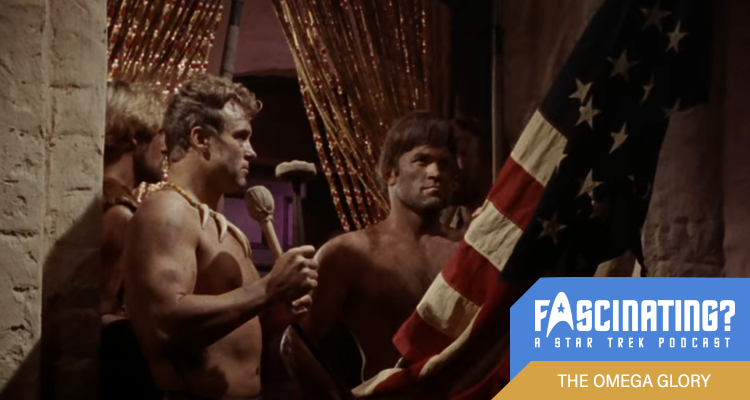 The Omega Glory was the twenty third episode of Star Trek’s second season to air, with alien communists oppressing noble alien Americans. In this episode Gerry and Iain discussed the constitution of the United States and its suitability as a blueprint for a new society.


After discovering a ship with a disintegrated crew, Kirk, Spock and McCoy are advised in a dying declaration by the ship’s doomed doctor to head to the planet surface below if they wish to avoid a similarly salty fate.


Discovering Captain Tracey (Morgan Woodward), the sole survivor amongst his crew, interfering with the local people and society puts Kirk and co. in a bind. With McCoy working hard to figure out the disease that killed Tracey’s crew, Kirk and Spock are imprisoned and come to learn something important about one of their cellmates.


The Omega Glory was directed by Vincent McEveety, the fifth of his six Star Trek episodes. The writer was Gene Roddenberry and he deserves all the blame for this one.


In this episode Gerry and Iain considered what they could see by the dawn’s early light.


The Omega Glory was released in 1968. It is 50 minutes long and originally aired on the NBC network. It can be viewed on Paramount+ in the United states, Netflix in the UK and is available on DVD and Blu Ray in other countries, including a comprehensive remastered set of all three seasons released by Paramount Home Entertainment.