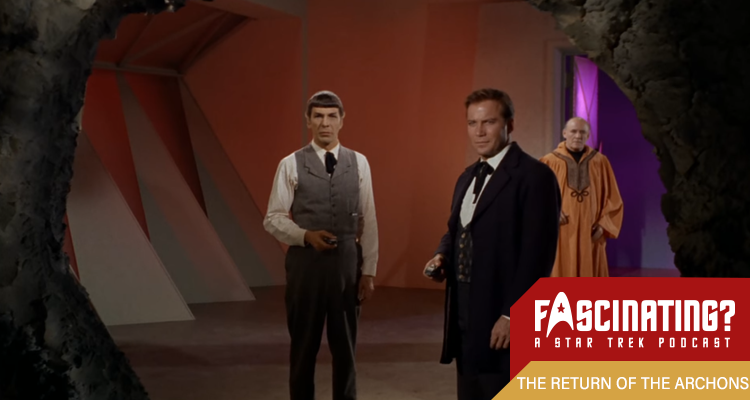 The Return of the Archons was the twenty-first episode of Star Trek’s debut season to air, with a peaceful civilisation challenged by visitors from the Enterprise. In this episode Gerry and Iain discuss the body and the glory of Landru. Peace be with you brothers and sisters.


When Sulu returns from a scouting mission declaring the planet below a paradise and praising Landru, Kirk and a landing party are immediately dispatched to investigate further. Finding a society resembling something from Earth’s history, they are shocked when friendly locals like Bilar (Ralph Maurer) and Tula (Brioni Farrell) suddenly turn savage.


Seeking refuge with Reger (Harry Townes) and Tamar (Jon Lormer), they soon draw the ire of Hacom (Morgan Farley) and the attention of Landru (Charles Macauley), who determines they must be absorbed into the ‘body’. Evading enforcement teams of Lawgivers (Sid Haig, Walker Edmiston) they receive unexpected help from Marplon (Torin Thatcher) before leaving the emotionally incontinent Lt Lindstrom (Christopher Held) to oversee a root and branch reform of the planet’s society.


The Return of the Archons was directed by Joseph Pevney, one of his record-equalling fourteen Star Trek episodes. The initial writer was Boris Sobelman, from a story idea by Gene Roddenberry.


In this episode Gerry and Iain considered who knows best about this sort of thing.


The Return of the Archons was released in 1967. It is 50 minutes long and originally aired on the NBC network. It can be viewed on CBS All Access in the United states, Netflix in the UK and is available on DVD and Blu Ray in other countries, including a comprehensive remastered set of all three seasons released by Paramount Home Entertainment.