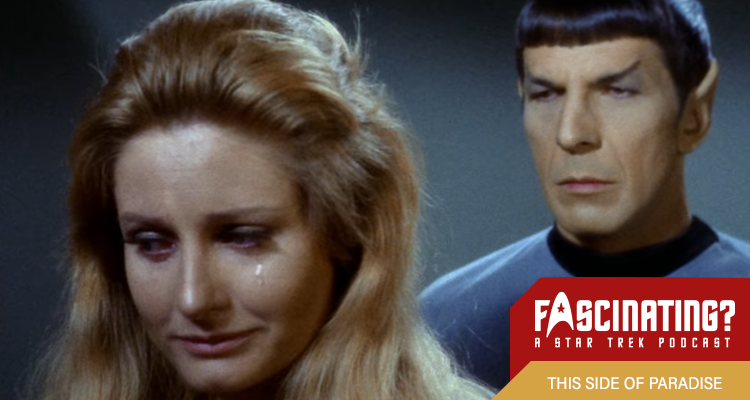 This Side of Paradise was the twenty-fourth episode of Star Trek’s debut season to air, with a colony spared certain death by spores that also affect their mood and personality. In this episode Gerry and Iain discuss the best techniques for playfully dangling from trees.


Kirk and his crew are tasked with confirming the demise of a colony founded under bombardment from berthold rays, since discovered to be deadly to humans. On arrival they are shocked to find a well-maintained settlement and to be greeted by colony leader Elias Sandoval (Frank Overton).


Among the colonists is an old unrequited flame of Spock’s, Leila Kalomi (Jill Ireland) who successfully recruits him to join the colony with the help of some unusual spores. Kirk must find a way to fight nature as more and more of his crew succumb to the spores and seek to abandon their posts to join the colony.


This Side of Paradise was directed by Ralph Senensky, the first of his seven Star Treks. The writer was Jerry Sohl, using the pseudonym Nathan Butler due to his dissatisfaction with changes made to his story by Dorothy Fontana.


In this episode Gerry and Iain considered mood altering substances and whether people have a right to their fantasies.


This Side of Paradise was released in 1967. It is 50 minutes long and originally aired on the NBC network. It can be viewed on CBS All Access in the United states, Netflix in the UK and is available on DVD and Blu Ray in other countries, including a comprehensive remastered set of all three seasons released by Paramount Home Entertainment.