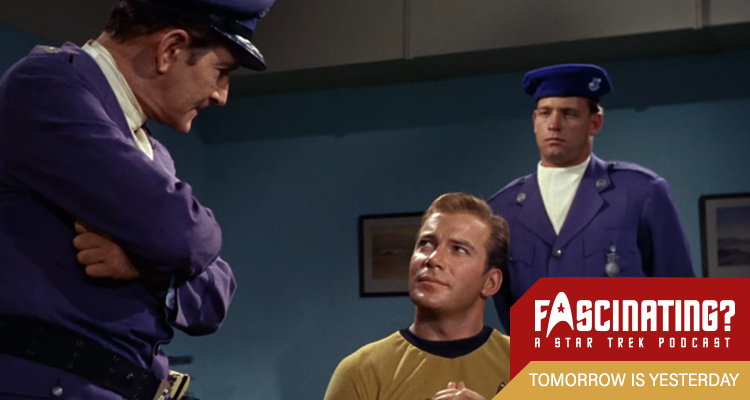 Tomorrow is Yesterday was the nineteenth episode of Star Trek’s debut season to air, with the Enterprise trapped in the past and some unfortunate airmen getting more than a glimpse of the future. In this episode Gerry and Iain discuss time paradoxes and before that they discuss the outcome of that conversation.


Escaping a black hole, the Enterprise is thrown back in time to the 20th century where they inadvertently pick up Captain Christopher (Roger Perry) and later an Air Police Sergeant (Hal Lynch).


Attempting to extricate themselves from the situation, Kirk and Sulu visit the air base, where the captain is captured by Col. Fellini (Ed Peck). A rescue follows before Spock devises a plan to restore the timeline and return the two visitors to their former lives without any damage caused.


Tomorrow is Yesterday was directed by Michael O’Herlihy, the his only Star Trek episode. The writer was DC Fontana, a Star Trek legend.


In this episode Gerry and Iain considered what the point of staging a daring ground mission was when you intended to reset time all along.


Tomorrow is Yesterday was released in 1967. It is 50 minutes long and originally aired on the NBC network. It can be viewed on CBS All Access in the United states, Netflix in the UK and is available on DVD and Blu Ray in other countries, including a comprehensive remastered set of all three seasons released by Paramount Home Entertainment.