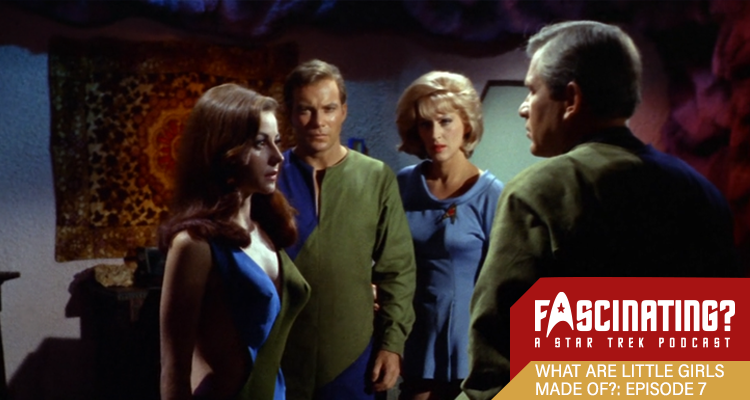 What Are Little Girls Made Of? was the seventh episode of Star Trek‘s debut season to air, with a dramatic rescue attempt undertaken to recover a scientist lost for half a decade. In this episode Gerry and Iain take a look at the threat of AI overthrowing its creators and how to convince people your sex robot is actually a completely innocuous android lab assistant.


Dr Roger Korby (Michael Strong) and his assistant Brown (Harry Basch) have been missing on the planet Exo-III for five years. Korby’s fiancée Christine Chapel (Majel Barrett) is a nurse on board the Enterprise and joins Kirk in an away mission to recover the missing genius.


On, or rather under, the planet they encounter unexpected resistance from a large android called Ruk (Ted Cassidy) who seems to operate in Korby’s interests. The doctor’s other help is a beautiful young woman named Andrea (Sherry Jackson), who draws Christine’s ire.


What Are Little Girls Made Of? was directed by James Goldstone and was written by Robert Bloch. Goldstone had also helmed Where No Man Has Gone Before, but this was his final Star Trek episode. Bloch, a correspondent of HP Lovecraft, wrote two further episodes, but is perhaps best known as the author of Psycho.


In this episode Gerry and Iain considered whether it was worth Korby’s efforts trying to convince Christine why he ‘really’ created Andrea; and the possibility of a naturally occurring phallic stalactite (phallictite?).


What Are Little Girls Made Of? was released in 1966. It is 50 minutes long and originally aired on the NBC network. It can be viewed on CBS All Access in the United states, Netflix in the UK and is available on DVD and Blu Ray in other countries, including a comprehensive remastered set of all three seasons released by Paramount Home Entertainment.