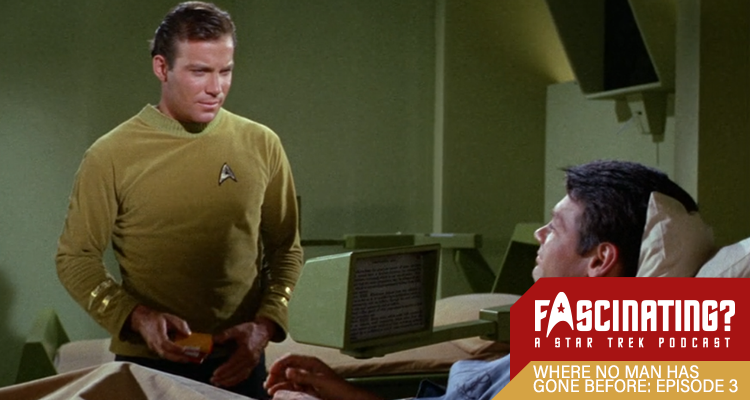 Where No Man Has Gone Before was the second pilot and the third episode of Star Trek‘s debut season to air, with a silvery-eyed man-god putting megalomania before maintaining friendships. In this episode Gerry and Iain take a look at a trigger-happy Vulcan and some snazzy sweaters.


The star of this show is Gary Mitchell (Gary Lockwood), a long-term friend of Captain Kirk’s, whose high ESP sensitivity causes him to be significantly affected by an invisible barrier at the galaxy’s edge. His treatment is managed by Dr Elizabeth Dehner (Sally Kellerman) who has her own part to play when Mitchell’s powers and ambitions begin to grow beyond anything the Enterprise can accommodate.


For the brief moment in time occupied by this episode, the ship’s medical matters are under the management of Dr Piper (Paul Fix) while Lee Kelso (Paul Carr) looks like a reliable officer, at least while he lasts.


Where No Man Has Gone Before was directed by James Goldstone and was written by Samuel A. Peeples. Goldstone would return later in the season to helm What Are Little Girls Made Of? but this was Peeples only contribution to Star Trek‘s original series.


In this episode Gerry and Iain considered the differences between this crew and the established group; the corrupting influence of power; and whether misogyny will live on into the 23rd century.


Where No Man Has Gone Before was released in 1966. It is 50 minutes long and originally aired on the NBC network. It can be viewed on CBS All Access in the United states, Netflix in the UK and is available on DVD and Blu Ray in other countries, including a comprehensive remastered set of all three seasons released by Paramount Home Entertainment.