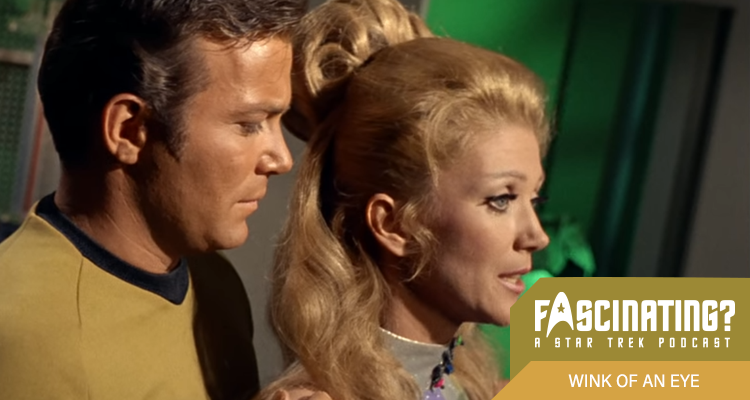 Wink of an Eye was the eleventh episode of Star Trek’s third season to air, with Kirk accelerated beyond human perception by an alien queen anxious to breed. In this episode Gerry and Iain discuss fast love and fast times.


Responding to a distress call, Kirk, McCoy, Spock and a redshirt visit the planet Scalos. When the redshirt vanishes after drinking local water, the team retreats to the Enterprise, but with a few surprise guests.


The Scalosian queen, Deela (Kathie Browne), has identified Kirk as the man to help her extend the lifespan of her species, despite the jealousy of her compatriot Rael (Jason Evers). Kirk, meanwhile, looks for a way to slow things down a bit.


Wink of an Eye was directed by Jud Taylor, the second of his five Star Trek episodes. The writer was Arthur Heinemann, the first of his three third season episodes.


In this episode Gerry and Iain considered the value of more speed and less haste.


Wink of an Eye was released in 1968. It is 50 minutes long and originally aired on the NBC network. It can be viewed on Paramount+ in the United states, Netflix in the UK and is available on DVD and Blu Ray in other countries, including a comprehensive remastered set of all three seasons released by Paramount Home Entertainment.