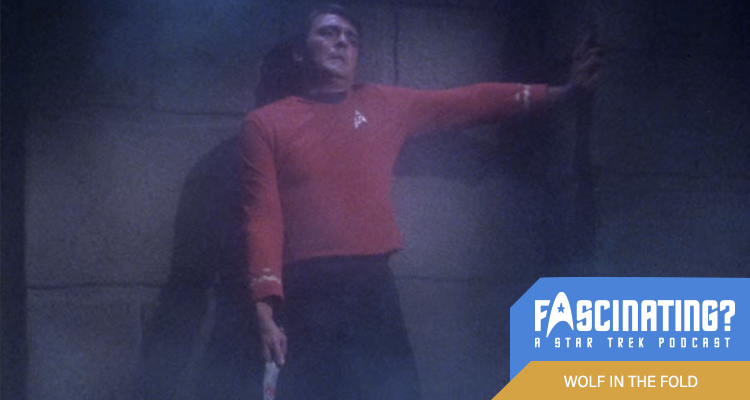 Wolf in the Fold was the fourteenth episode of Star Trek’s second season to air, with Scotty facing multiple murder charges on an otherwise peaceful and idyllic planet. In this episode Gerry and Iain discuss a preponderance of evidence and some shaky legal arguments.


After an accident leaves Scotty showing signs of concussion and misogyny, Kirk and McCoy accompany him to a hedonistic planet where he can work out his issues. Events, however, take a worrying turn when a young woman is killed with Scotty found over the body holding the murder weapon.


With the local investigator Hengist (John Fiedler) convinced he has his man, it is only the instincts of head official Jaris (Charles Macaulay) that stands between Scotty and the death penalty.


Wolf in the Fold was directed by Joseph Pevney, the twelfth of his fourteen Star Trek episodes. The writer was Robert Bloch, the last of his three scripts for the series.


In this episode Gerry and Iain considered the curious whitewashing of some of history’s most notorious serial killers.


Wolf in the Fold was released in 1967. It is 50 minutes long and originally aired on the NBC network. It can be viewed on CBS All Access in the United states, Netflix in the UK and is available on DVD and Blu Ray in other countries, including a comprehensive remastered set of all three seasons released by Paramount Home Entertainment.